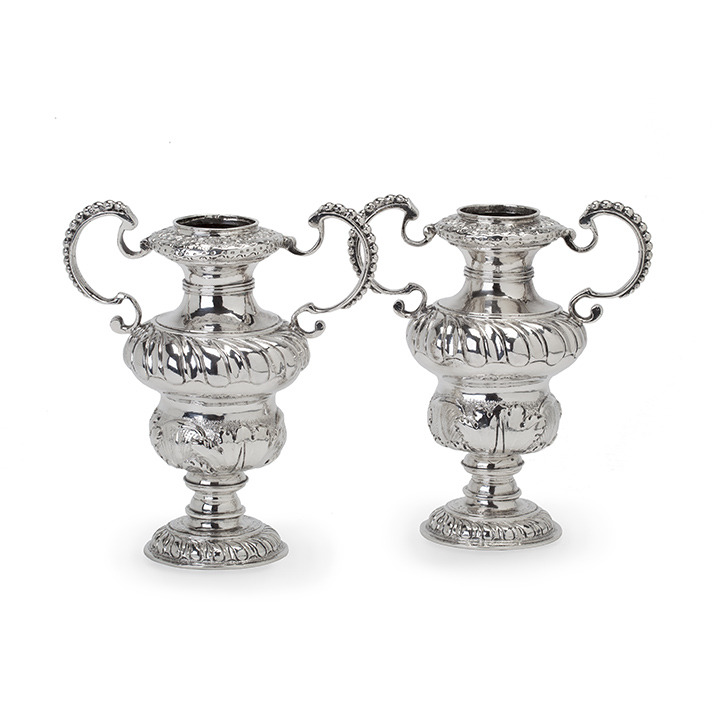 The baluster body, chased with acanthus and gadroons is raised on a circular foot, displaying the inscription: Neeltie Albers: GD: obiit den 30 sept. Ao 1704. A circular disc, chased with gadroons, surmounts the narrow neck with reeded border. The scroll handles at the sides are embellished with beading.

Flower-filled silver altar vases used to be placed on the altar between the pricket candlesticks, on either side of the tabernacle during mass in catholic churches and cathedrals. In some churches they are still part of the liturgical silver treasure and are used on special occasions, for example at Easter, Pentacost and Christmas.

This pair of altar vases was made to commemorate the death of Neeltie Albers on 30 September 1704.The initials GD refer to ‘geestelijke dochter’, which means she was a so-called ‘klopje’. However, the date on these altar vases reads 1707. It is likely that the family ordered them some years after Neeltje’s death to commemorate her.So far, Neeltje Albers name has not been found among the ‘geestelijke dochters’. She probably ‘served’ in the city of Amsterdam or in West Friesland, Enkhuizen, Hoorn or other places.

‘Klopjes’ were unmarried catholic women or men (the so-called klopbroeders), who devoted themselves to church service. They had vowed chastity. The women used to wear special clothing: a black gown with a white cap, terminating in a point on the forehead, a so-called devil’s cap. Some lived alone, others with two or three together and some lived with their parents or family members. There were many prosperous ‘klopjes’, from whom the church benefitted. They had hidden churches and virgin houses built and took care of poorer ‘klopjes’. Klopjes could be servants or maids in a vicarage. Some taught the Holy Scriptures, others used to bake wafers, were altar servants or vergers or choristers.

According to church files, Johannes (Hans) Erickse from Middelburg was born in 1643 and married Jacoba Huiberts Appelmans on 7 May 1665. He was a 22-year-old goldsmith at that time. In 1665 he also became poorter (citizen) of Amsterdam and member of the Amsterdam gold and silversmiths’ guild. The date of his death is unknown. However it should have been after 1707, since these vases have been struck with his maker’s mark HE.