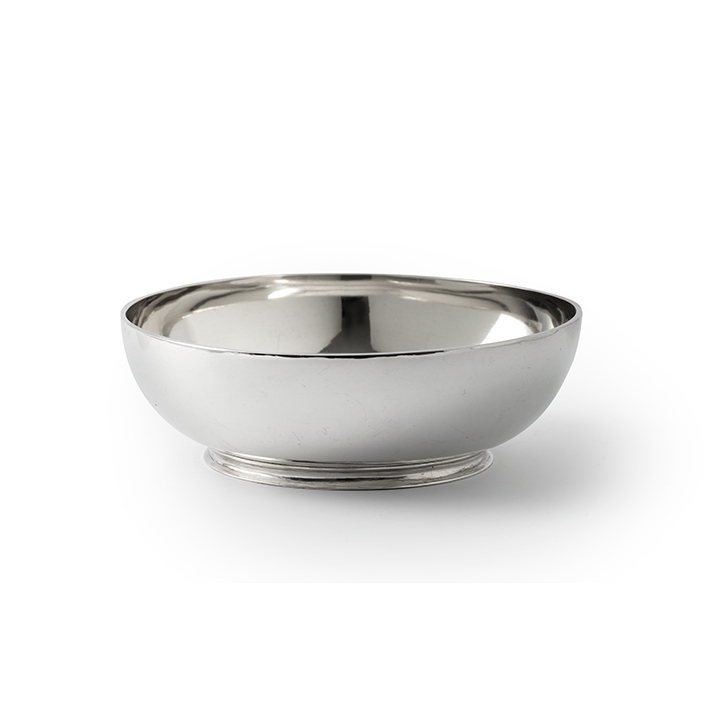 The plain chased circular bowl rests on a circular rim base.

Fully marked at the reverse and displaying an assay stripe.

Dutch silver wine tasters are rather rare, whereas French ones are rather common. Wine merchants, members of the guild, used to taste their wines before selling them.

This plain, circular Dordrecht example dates from 1804. Some other Dutch silver wine tasters are known. One made by the Rotterdam master Hendrik van Es in 1800, described by J.R ter Molen in his book Zilver, the other made by the Rotterdam master Anthony Huijs, whose maker’s mark was overstruck by Anthony Huijs jr. in 1784. The latter one was in the collection of Jacob J. Roosjen in 2011.

The maker’s mark of this Dordrecht silver wine taster has also been overstruck. This was done when another silversmith or retailer took over the responsibility of the object when it was sold. Later in the 19th century this phenomenon disappeared, when a special retailer’s mark was introduced, which was additionally struck next to the maker’s mark.

On a 17th century painting by Ferdinand Bol, dated 1659, depicting the Amsterdam wine merchants’ guild, one of the members is holding a silver wine taster together with a silver siphon by means of which the taster is being filled. This is an indication that wine tasters already existed in the 17th century.

Johannes Keeman (1740-1819) had a long, active life and his ouevre is varied and extensive. He made use of three maker’s marks. The one on this wine taster was struck on the narrow inculpation plate of the guild, number 11.

In 1764 he married Johanna van der Blijk, sister of Jacobus van der Blijk, also a silversmith. The couple had three children, of whom Joannes jr. Followed in his father’s footsteps. Johannes (Jan) Keeman was a member of the Kloveniers guild from 1786-1819. In 1811 he is still mentioned on the Dordrecht Liste Civique as an ‘orfevre’. In 1819 it was stated that he was without a profession. He was a member of the ‘Evangelisch Lutherse’ church. He died on 22 October 1819, said to have been ‘Binnenvader van het Nieuwarmhuis’ (a charity for the poor).