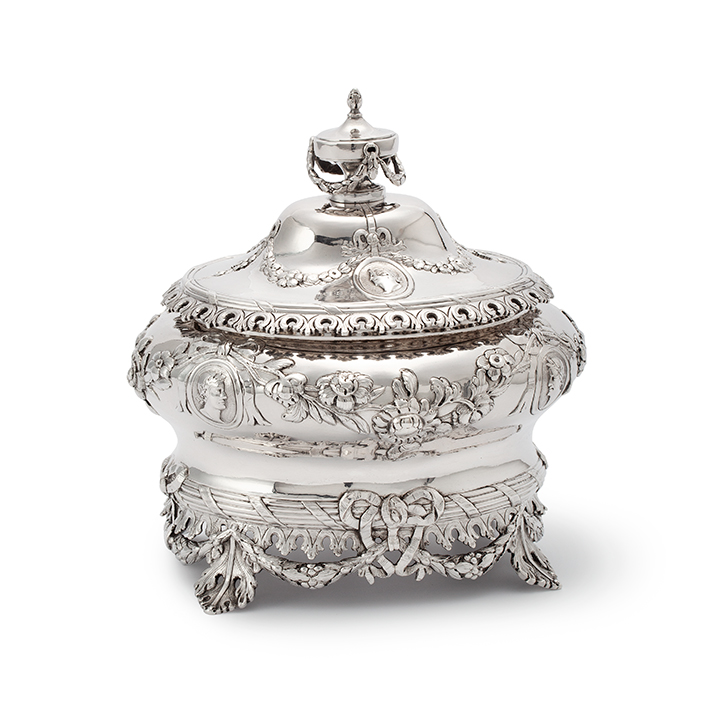 This fine Louis XVI tobacco jar of bombé form is raised on four feet in the form of stylised acanthus leaves. The lower border of the jar displays hanging garlands and tied ribbons. The body and cover are chased with floral swags and classical portrait busts. The detachable cover has a vase –shaped finial with swags. Fully marked at the reverse of the body, displaying an assay stripe. Also struck with a duty mark of Haarlem for 1795.

Nowadays, Dutch silver tobacco jars can be found in museums and private collections, but in the past they were actually used by pipe-smoking magistrates and merchants, who loved to surround themselves with precious objects. From 1720 -1790 the finest silver tobacco jars were made throughout the Netherlands, in various styles and sizes. Thereafter, they often came with a matching brazier, containing coals for lighting the clay pipes. In a jar the tobacco would be well preserved and kept dry.

Amersfoort-born Wijnand Warneke (circa 1738-1810) became poorter (citizen) of Amsterdam in 1763, the year in which he became a member of the Amsterdam silversmiths’ guild. He married Jacoba de Put, a goldsmith’s daughter in 1764. The couple initially lived at ‘Eerste Leliedwarsstraat’. Their daughter Arnoldina married Johannes Kluytenaar jr. who enrolled at the guild in 1793. Wijnand Warneke was a productive silversmith and ‘kashouder’ (retailer). He died in 1810. During his long and productive career as a silversmith Wijnand Warneke worked in different styles. This fine elaborate tobacco jar was made in Louis XVI style.