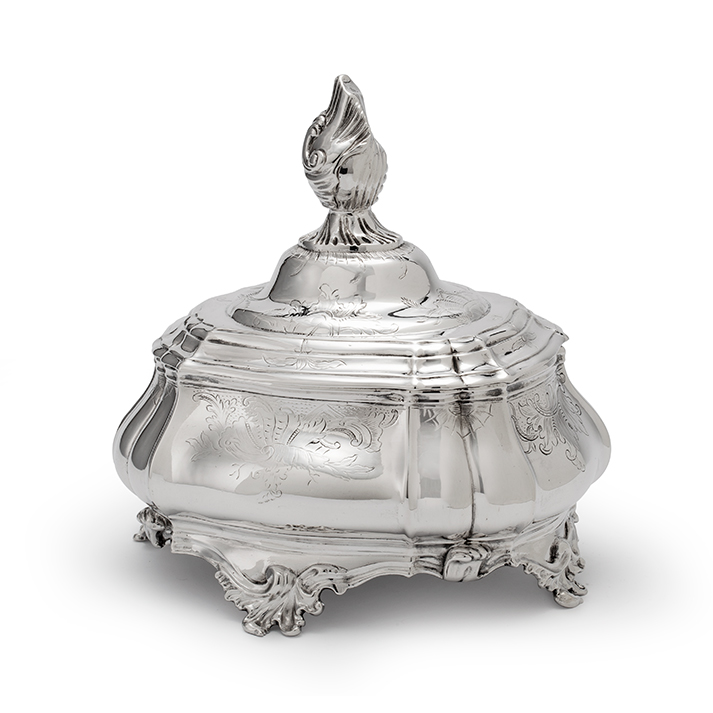 The bombé chased symmetrical body of this Regence tobacco jar is ribbed and fluted at the angles and is raised on four rocaille supports. It is engraved with rocaille, an asymmetrical decoration. The detachable cover with flame finial is also engraved with rocaille. Fully marked at the reverse and marked the maker’s mark and provincial lion on the interior of the cover, also with a control mark for 1795.

Amersfoort-born Wijnand Warneke (circa 1738-1810) became poorter (citizen) of Amsterdam in 1763, the year in which he became a member of the Amsterdam silversmiths’ guild. He married Jacoba de Put, a goldsmith’s daughter in 1764. The couple initially lived at ‘Eerste Leliedwarsstraat’. Their daughter Arnoldina married Johannes Kluytenaar jr. who enrolled at the guild in 1793. Wijnand Warneke was a productive silversmith and ‘kashouder’ (retailer). He died in 1810.

This Regence tobacco jar from 1763, the year in which Wijnand Warneke enrolled in the Amsterdam silversmiths’ guild, is an early, or rather the earliest object that was made by this productive silversmith. Besides tobacco jars, he also is known to have made a table fountain in 1766, candlesticks, coffee pots, tea services, bread baskets and sugar bowls.

Other tobacco jars by Wijnand Warneke, dated 1768 and 1771, which were described in the literature, display similar flame finials. These finials also occur on tobacco jars made by fellow silversmiths in the Amsterdam guild, such as the ones by Lucas Claterbos in 1761 and 1762 and one made by Matthijs Crayenschot in 1766.