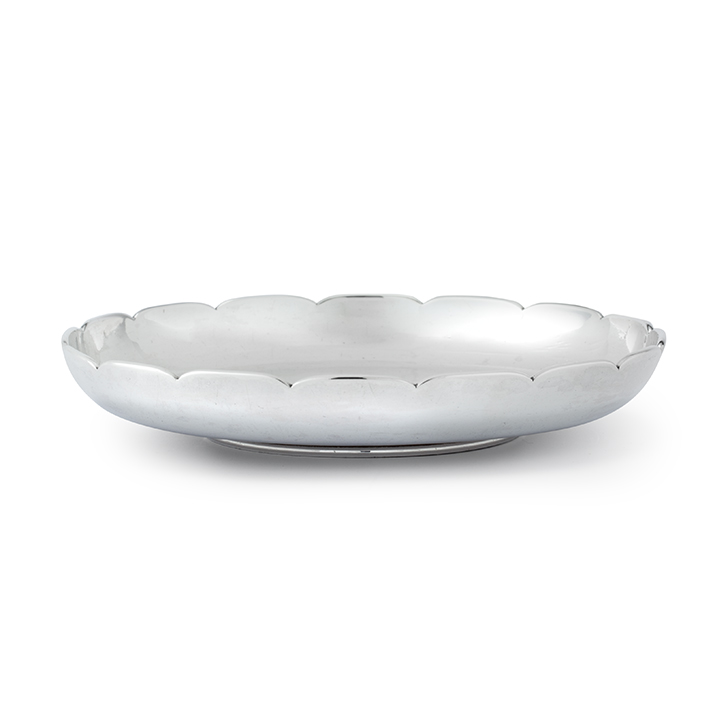 The plain circular chased dish on a ring base has a scalloped rim. Fully marked on the reverse and displaying an assay stripe.

In literature on silver this type of dish is often referred to as strawberry dish, but not solely. In old inventories also the name ‘groenteschaaltje’ (vegetable dish) occurs. However, early 18th century Breda circular dishes, often with scalloped border, are referred to as strawberry dishes, the term is also used in the English trade. Breda strawberries are a rather small and sweet variety. Breda circular silver dishes of 10-13 cm diameter are therefore very suitable for strawberries. English strawberry dishes are usually larger in diameter. With Huguenots in France at the end of the 17th century and later in England this type of dish used to be rather popular. Early 18th century Dutch silver strawberry dishes that still exist, were made in The Hague by for example Adriaan Havelaar en Henric van Leusden, in Amsterdam by Otto Knoop and Alger Mensma and in Breda by Bernardus Perquin, Carolus van Dokkum and Bastiaan Koningh. A similar dish, made by Bastiaan Koningh in 1727, was recorded in literature about Breda silver.

Sebastiaan (Bastiaan) Koningh (Koninck, Koninx), son of Gerrit Koningh and Louysa Werkhoven, was born ca. 1682. He was an apprentice at Justus Hoselman’s workshop in Breda and he became a master-silversmith himself in 1707. His maker’s mark is ‘a bird in an oval shield’. In 1714 he bought a house at the Havermarkt in Breda, called ‘De Arend’ (the Eagle) from Maria Johanna Domis, a descendant from a Breda silversmiths’ family. He used to employ many apprentices, including his son Cornelis, who did not finish his apprenticeship. Bastiaan Koningh held the position of ‘Dean of the Guild’ for many years during his long active life as a silversmith. He died in Breda on 3 August 1763 and was buried in the Grote Kerk on 8 August.