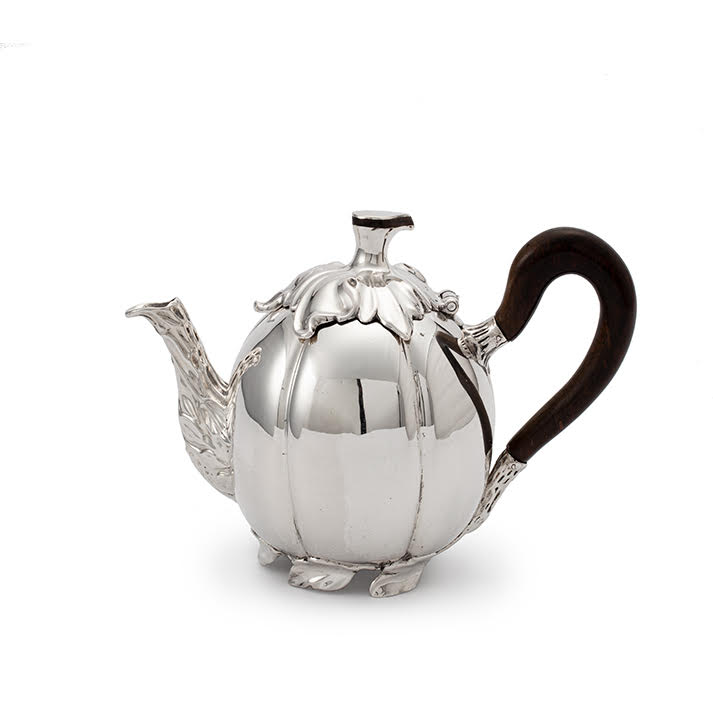 This naturalistic silver teapot, raised on five leaf supports, with leaf-moulded spout and wood handle, is a fine example of Louis XV style in the Netherlands.

Karl von Quadt was born on 4 August 1732 as son of Willem Albrecht Johan Karel Frederik von Quadt by his second wife Hermina Charlotta van Heiden. On 23 July 1752 Karl married Anna van Nagell, who was born in Lochem on 28 May 1735. They were blessed with a daughter, Constantia Herminia Albertina Maria Jacoba von Quadt –Hüchtenbroeck. An18th century German School artist painted the couple’s portraits, which were offered for sale at Sotheby’s auction in Beloeil, Belgium, on 16 June 1992.

Salomon Lamberts, son of Salomon Lamberts and Sara de Goyer, was born in Amsterdam in 1709. He must have received his training for becoming a master-silversmith in Amsterdam. In 1734, however, he became ‘burgher’ of Zutphen, where he married Theodora Coolhaas that same year. She was a goldsmith’s daughter. Salomon Lamberts lived and worked in Zutphen during a period of thirty years.

Salomon Lamberts can be regarded as an important 18th century silversmith in Zutphen, who received commissions from Zutphen aristocrats and wealthy citizens for precious silver household objects. Similar pumpkin-shaped teapots of his hand are known. A fine silver salver with shell ornaments by Salomon Lamberts, dated 1741, is also in our collection.