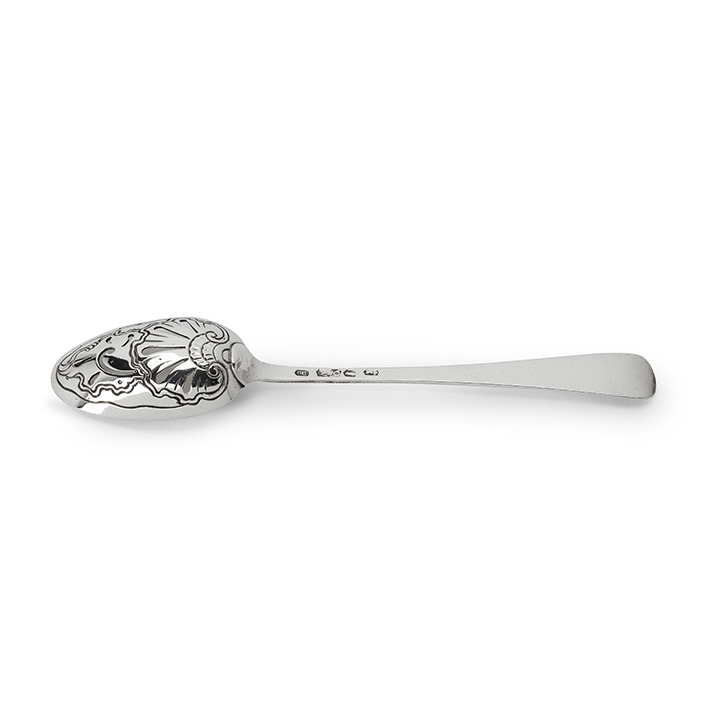 Mote spoons are actually pierced teaspoons, meant to sieve tea leaves and other particles from teacups. Tea used to be less pure as it is now and also slightly more crude, which explains the rather wide piercings in this spoon. Dutch mote spoons are quite rare. This master silversmith has made at least two sets of mote spoons, which are part of two oak-veneered tea chests. In 1780 Dirk van der Goorberg made three silver tea caddies and four mote spoons in total for one chest. A similar tea chest, made in 1771, consists of three tea caddies and six mote spoons by Dirk van der Goorberg. This mote spoon, dated 1774, might have been part of a set of mote spoons in a tea chest, which is still unknown or non-existing.

Dirk van der Goorbergh (circa 1723-1816) was a very skilled Delft master, whose work could compete with that of the renowned The Hague silversmiths at that time. A good example is the silver water kettle made by Dirk in 1774, which was exhibited at the Rococo exhibition in the Rijksmuseum, Amsterdam in 2001. Furthermore, the work of English silversmiths, who worked in the so-called Adam style (from ca. 1765-1795), might have influenced Dirk van der Goorberg. English catalogues with designs from Sheffield, Birmingham and London silversmiths were available to Dutch silversmiths due to the trade contacts via Rotterdam harbour.