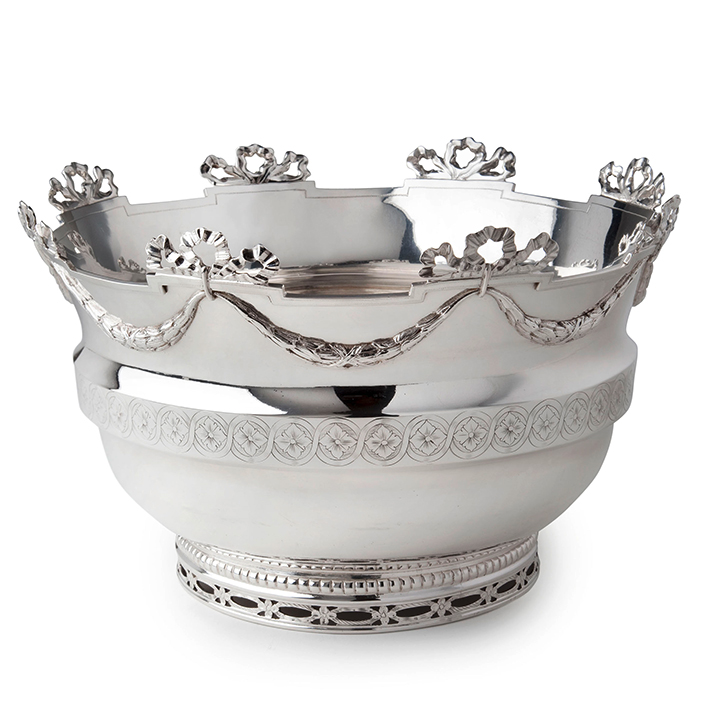 Monteith bowls were introduced at the end of the 17th century and named after the scalloped coat of Mr Monteith, a flamboyant Scottish gentleman. They were intended for cooling or rinsing wine glasses. The cups of the glasses used to be put in iced water by servants, placing the feet of the glasses in the notches. Later on, Monteith bowls also served another purpose, namely that of punch bowls, so that the scalloped edge became a decorative feature. Nowadays, a Monteith bowl could very well function as a wine cooler, for cooling a fine bottle of white wine or champagne.

Initially, silver Monteith bowls were made in Britain and Ireland around 1680. In the 18th century some were also executed in Germany, Holland and France. Even some American examples are known, dating from the 18th century.

Monteiths were often used as Presentation pieces to commemorate a certain event. For instance, they were given as racing trophies, sometimes engraved with an inscription or a coat-of-arms. Dutch silver Monteith bowls are rather rare. This fine Dutch silver object is a unique piece made by a skilled The Hague silversmith, Reynier de Haan (1712-1783), whose work can be found in the collections of the Rijksmuseum in Amsterdam and Gemeentemuseum, now Kunstmuseum, in The Hague.

This monteith bowl has a very fine provenance and is recorded in the literature on Dutch silver.