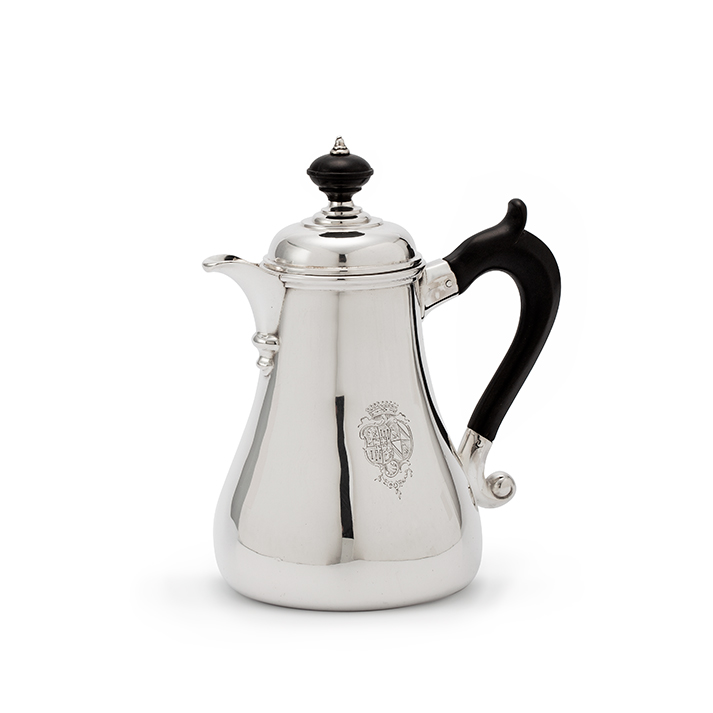 The plain baluster-shaped mocha pot with small spout has a detachable domed cover with wood knob finial with silver pinnacle. The wood scroll silver-mounted handle has a scroll mount below. The body is armorial engraved in the centre. Fully marked at the reverse and displaying assay stripes.

The coats-of arms are those of Daniel Gerritzn. Hooft, ‘Heer van Vreeland’ (1741-1803) and Agnes Maria Geelvinck (1752-1816), both born into leading Amsterdam families, who married on 16 April 1769. Agnes (Agneta) was only seventeen years old at that time. She was the eleventh child of Nicolaas Geelvinck, ‘Heer van Castricum’ and Maria Margaretha Corver. Daniel Hooft was the first son of Gerrit Hooft, ‘Heer van Vreeland’ en Maria Johanna van der Dussen. Daniel married when he was 28 years old and he became lawyer at “Hof van Holland”. The couple lived at Herengracht 552 in Amsterdam and they also owned an estate in Velsen, where Agnes Maria died in 1803. Maria Margaretha Corver, Agnes Maria’s mother, was Nicolaas Geelvincks third spouse. She inherited estates at Velsen and Santpoort and the estate Watervliet from her father Gerrit Corver, who held the position of burgomaster of Amsterdam 10 times.

Alger Mensma (Leeuwarden 1682- Leeuwarden after 1757), the silversmith, apparently went to Amsterdam, where he married Elisabeth Steenstraat in 1709. In 1710 he became poorter (burgher) of Amsterdam and became a member of the Amsterdam silversmiths’ guild. His father Nicolaas Mensma worked as a silversmith in Leeuwarden and undoubtedly Alger will have received his training from him. After his second marriage to Sara van der Weide in 1730, the couple lived at Buiksloot. From his remaining works it can be concluded that Alger Mensma received many important commissions. For example, in 1731 he made a huge silver cooler, commissioned by the Admiralty of Amsterdam, donated to Captain Cornelis Schrijver. In 1732 this same captain was given a large silver fountain, made by Alger Mensma, who received this commission from the Dutch East India Company (VOC). Both objects form a set, which is now in the collection of the Rijksmuseum in Amsterdam.