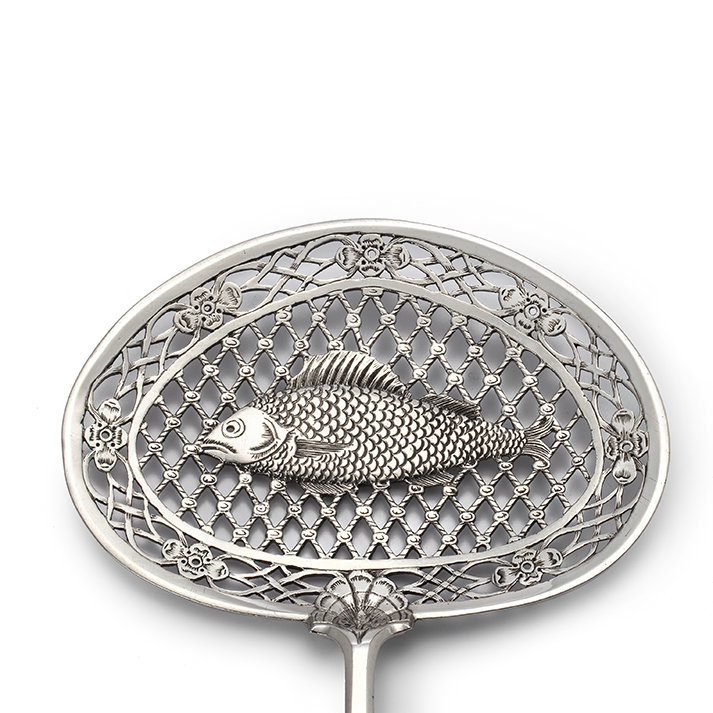 The oval pierced and engraved blade is centred by a fish in a net, surrounded by a border with flower heads. The elongated tapering handle with rounded top displays a girdle above the blade. Fully marked at the reverse and displaying an assay stripe.

Frederik Rudolf Precht was born in Bassen, near Bremen circa 1714. Like many of his fellow silversmiths he went to Amsterdam probably for socio-economic reasons. In 1744 he entered the Amsterdam guild and married that same year to Magdalena van Kooten, his first wife. In 1754 his second marriage to Neeltje Wanschert took place. In 1787, at the time of his death, he lived at Bethanienstraat near Cloveniersburgwal. From municipal archives it becomes clear that Precht must have worked until the year of his death.

Precht is primarily known as a cutlery maker, who cooperated with other Amsterdam silversmiths like Johan Diederik Sluyter and Jan Diederik Pont. Precht might have derived the model of this fish slice from Jan Diederik Pont, who made two similar fish slices in 1754.

Precht received an important commission from the Amsterdam Burgerweeshuis, for which he made 36 forks, knives and spoons, while Jan Diederik Pont made two fish slices for the same commissioner in 1758. For the Amsterdam Diaconie Oude Vrouwenhuis an extensive set of cutlery was made by various silversmiths, including Precht, of which some 169 items have been preserved (Vreeken 2003, cat. nr. 301).