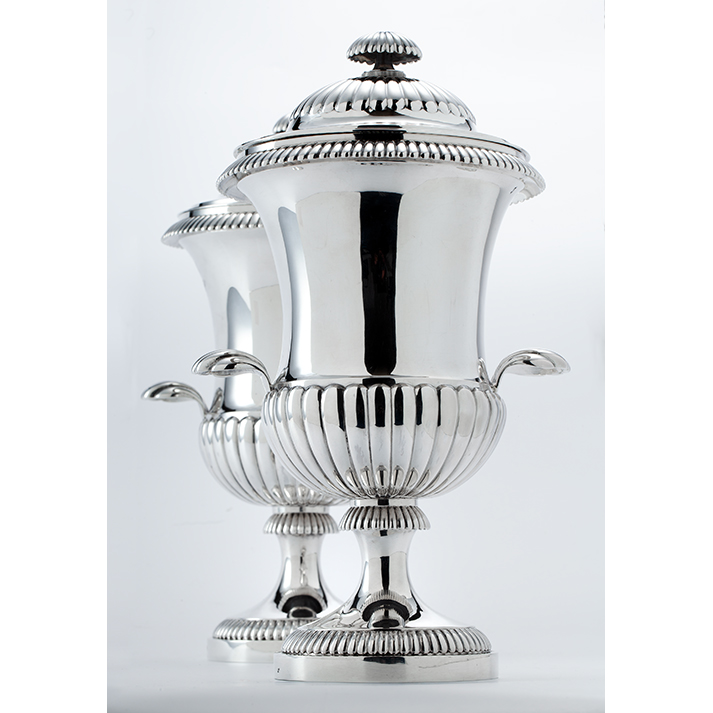 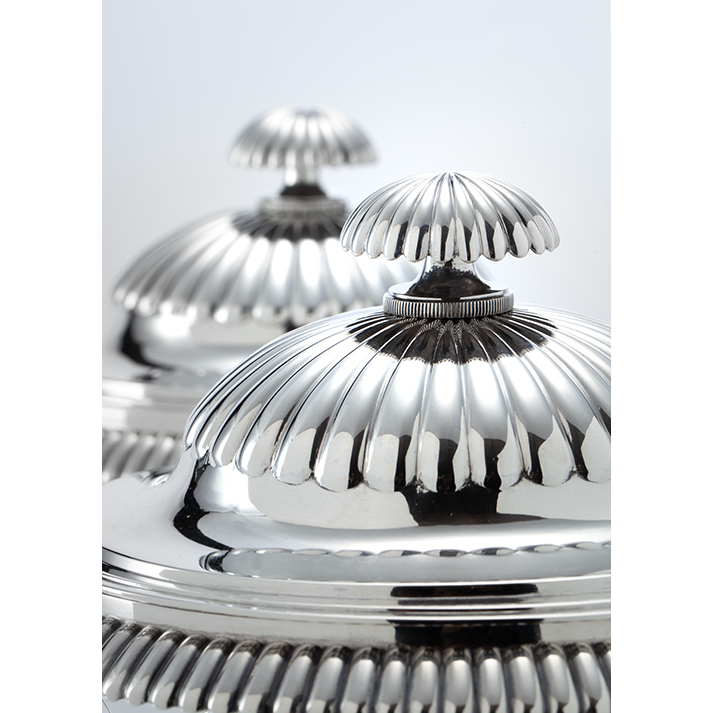 Silver chestnut vases usually came in pairs. From the late 18th century till the first half of the 19h century candied chestnuts (marron glacés) used to be put in these lush chestnut vases, which were either placed on the table or on the mantelpiece, just for the sake of displaying one’s wealth. Amsterdam silversmiths like Bennewitz, Stellingwerff and Bentvelt used to make silver chestnut vases in various shapes and sizes for companies such as Bennewitz & Bonebakker and Diemont. Some of those pairs have found their way to museum collections, due to the fact that silver chestnut vases were mainly made in the Netherlands during a short period of time.

Jan Anthonis de Haas, as a service worker, was a regular supplier to the company Bennewitz & Bonebakker. However, from 1 January 1822 onward, this company ceased to exist. From 1822 J.A. de Haas’s name appears as ‘work master’ at the new company As Bonebakker & Son. Together with other ‘work masters’ Bentvelt and Stellingwerff he was very productive and he earned the most for his supplies of silver objects to the new firm in 1822. These silver chestnut vases are dated 1822.

On February 1822 Mr Nolthenius, who lived at Keizersgracht near the Amstel, Amsterdam, ordered a pair of silver chestnut vases from Bonebakker & Son. As stated in the ‘Notitienboek van ingekomen orders, 1822-1833’ (order book) these commission of a pair of gadroon vases should be ready before the end of August that year for the set price of 400 guilders. From the ‘werkmansboek 1822-1825’ (suppliers’ book) it is known that on 27 July 1822 Jan Anthonis de Haas delivered a pair of chestnut vases with gadrooning for the sum of 130 guilders:‘1 prs Castagne Vaasen met gaudrons’ 8 (mark)- 8 (lood) – 3 ¾ (engels) – 130 (gulden). So it seems that the delivery of the chestnut vases was in time. Unfortunately, Mr Nolthenius, who was a frequent client of Bonebakker’s, did not buy these chestnut vases, as stated in the general ledger of 1822. It appears that Bonebakker had taken into account that Nolthenius would not buy them ‘zijn Ev gezegd zo dezelve niet mogte voldoen daar voor ons te houden’. In that case they would keep them in stock.

Actually, Bonebakker kept them in stock till November 1825. On 24 November 1825 these chestnut vases were sold for 435 guilders by As Bonebakker & Son to J. Carp, who lived at Keizergracht near Leidsestraat in Amsterdam: 1 paar castagne vazen met goudronnen 8:8:3 3/4 f 435,-, together with green chamois leather-lined bags, costing 5 guilders.

Johannes Carp (1761-1840), son of George Willem Carp, was a member of the company Jan Willem Carp & Son in Amsterdam until the liquidation of the company in 1821. Thereafter, Johannes Carp became Director of the Nederlandsche Bank and a member of the Amsterdam City Council, the States of Holland and the Chamber of Commerce. On 10 April 1794 he married jonkvrouwe Cornelia Emerentia Van Winter, who was born in Amsterdam in 1772. After Johannes Carp’s death, a notaray in Amsterdam, Mr Commelin, commissioned some liturgical silver from As. Bonebakker & Son in 1845, as a bequest by Johannes Carp. Cornelia died in Amsterdam in 1858, then living at Keizersgracht nr. 360. The portraits of the couple are attributed to Charles Howard Hodges.